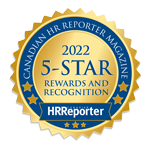 If there was ever a time when employee rewards and recognition (R&R) were needed, it’s during the ongoing pandemic. As many people struggle — whether they are retail or health care front-liners, or parents working from home while taking care of their kids, or single people increasingly isolated from coworkers — feeling valued and appreciated by their employer is much more important.

To that end, several Canadian organizations not only maintained an impressive focus on recognition during the past two years, but upped their offerings to recognize the hard work of staff and boost morale. Canadian HR Reporter spoke with three of the 13 5-Star Rewards and Recognition winners to learn about their unique programs.

“Not only does it allow us to improve our existing procedures and better ourselves as a company, but it’s another great way to recognize our employees and let them know just how valued they really are”
Laura Salvatore, Centurion Asset Management

Employee recognition has always been a significant part of the culture at Centurion, says Laura Salvatore, associate vice president of human capital at Centurion Property Associates and Centurion Asset Management in Toronto.

“We’re really big on ensuring that recognition happens in the moment and not months later, when it’s time for annual reviews. Employees want to know how they’re doing in the moment, especially with this newest generation of workers.”

But to manage the impact of the pandemic, the 300‑employee company had to rethink its R&R programs, she says. The challenge for Centurion was to find ways to keep employees engaged and make them feel appreciated in a remote environment.

One of the first steps was an Excellence Award through which employees could recognize peers who “exemplified Centurion’s core values of respect, integrity, simplicity and excellence, and who had gone out of their way to ensure the safety and security of our residents during this challenging time,” says Salvatore.

Another initiative was an employee innovation channel where people could share ideas directly with the entire leadership team. Once a quarter, the best idea is implemented and the employee who proposed it receives a bonus, she says.

“We’ve had a lot of success with this program because not only does it allow us to improve our existing procedures and better ourselves as a company, but it’s another great way to recognize our employees and let them know just how valued they really are.”

Other forms of recognition include a deferred incentive program for employees in key roles who have been identified as high performers. Employees are awarded units in the company and can access them after three years, benefiting from the distributions. A more recent initiative is the Centurion Learning Academy, an online platform that gives employees access to more than 400 different learning modules that they can use at any time.

“The more modules they complete, they get different awards, they get little badges, they can compete against each other for points, which is really exciting. We also offer them a small cash incentive if they complete a number of modules,” Salvatore says.

As a final example of Centurion’s focus on R&R, the 300‑employee company closes down for a week over the year-end holidays. This means that employees don’t have to use their vacation leave credits, and they get an extra week from the get-go. 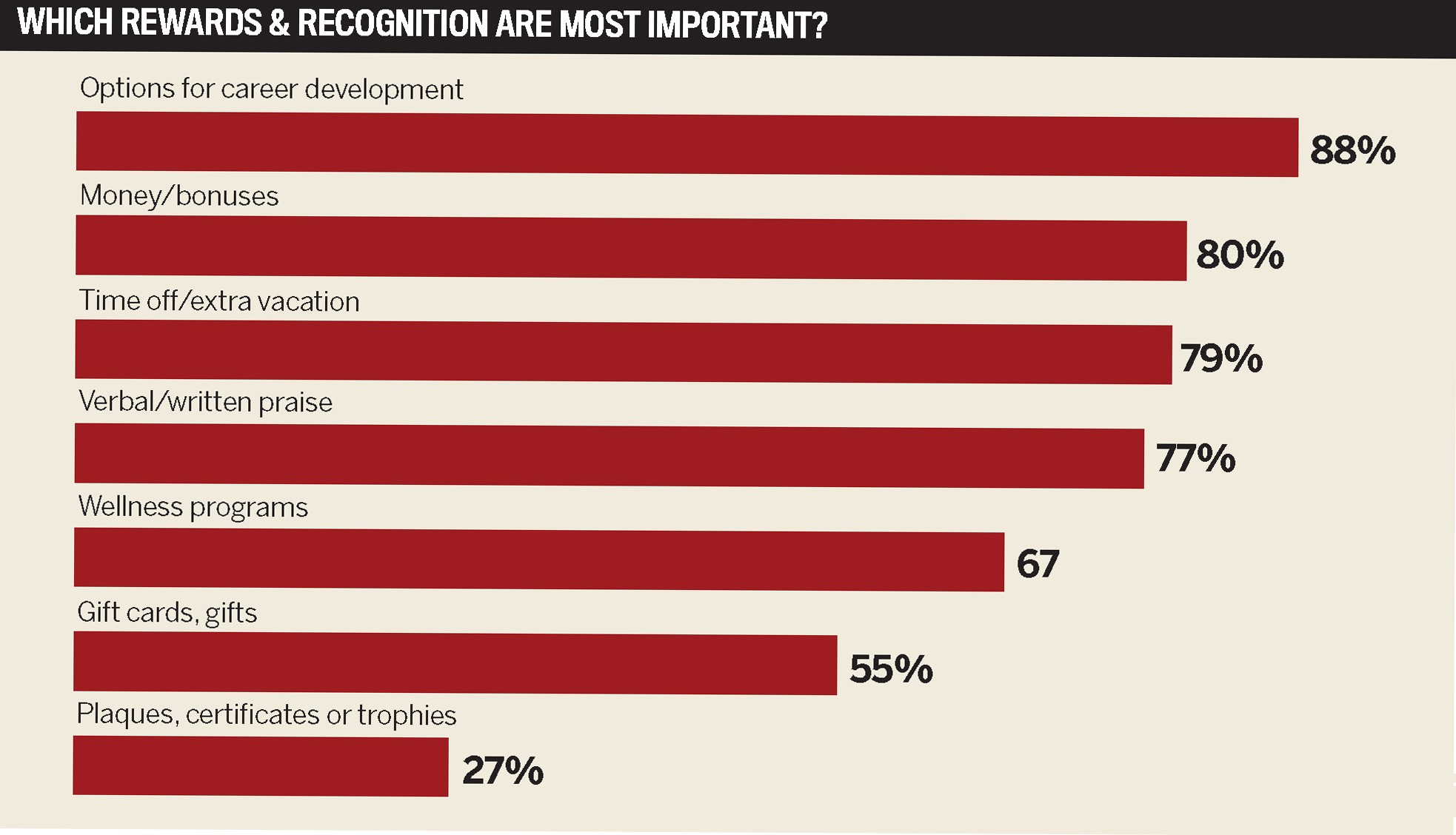 “We wanted to really transform our rewards and recognition program to be appropriate to the virtual environment, when half of our employees are still working remotely, [and to] staff in the physical work environment”
Lauren Small, Town of Innisfil

Under the current circumstances, rewarding and recognizing employees is an important part of the culture at the Town of Innisfil in Ontario, according to Lauren Small, people and talent developer at the municipality. Innisfil has 230 full-time employees and nearly 100 volunteers who are largely firefighters.

“With COVID and everything else going on, we wanted to really transform our rewards and recognition program to be appropriate to the virtual environment, when half of our employees are still working remotely, but we also wanted to ensure that it was appropriate for … staff in the physical work environment, which is our essential workers — so our operators, our snow plow drivers, our firefighters. We had to tailor our rewards and recognition program for that.”

Given the unique challenges of the past two years, the Town wanted to award employees for continuous dedication, so they were all given T-shirts and goodie bags as a token of appreciation. And when the pandemic does subside and the organization moves to a hybrid approach, everyone will be presented with another goodie bag to welcome them back, says Small. Importantly, front-line staff may be given different items than office staff, such as water bottles instead of note pads.

“Although we’re running with the whole premise of pushing out these amazing R&R programs, we also take into account that there are two totally different ways of working and needs of both employee groups,” she says.

The Town of Innisfil also has a recognition task force made up of members from service area departments across the town. They serve as ambassadors for the R&R program, which is helpful when it comes to communication, says Small. “We want to be mindful that not everyone [has the same] technology and we need to communicate in different ways.”

A kudos award also encourages employees to nominate co-workers in any department who go above and beyond their duty, she says. Everyone who is nominated is sent an email service certificate and recognized on the internal social media platform. Names are then drawn on a quarterly basis and the winners are sent gift cards.

As for career development, the municipality supports initiatives such as stretch projects and working cross-functionally with other teams, says Small.

“It’s not just about the actual promotion but it’s about utilizing the skills and strengths of each other in order to accomplish a task, and I think that’s one of the biggest pieces.”

While the YMCA-YWCA of the National Capital Region usually has a staff of roughly 900 to 1,000 in the high season, it’s currently at 300 because of mandated shutdowns by the province. But it’s important to recognize that every single person has a role to play and is “vital to the success of our charity in our community,” says Bob Gallagher, president and CEO.

To recognize and appreciate people, the organization doesn’t use the same vehicle in the same format for each person, which is a key philosophy. As an example, during the beginning of the pandemic, staff who were working on site received a $50-per-week food allowance at the cafeteria.

The YMCA-YWCA also increased compensation by an hourly rate of $5 to recognize “the efforts these folks are putting in, going above and beyond,” says Gallagher.

One of the popular recognition programs at the Ottawa organization has involved “essential hero” sweaters for employees.

“We didn’t want to do an ‘employee of the week’…. we tried to recognize as many people as we possibly could during the whole COVID time,” he says. “Two years later, I still see staff walking around at work, walking around the community, proudly wearing their hero sweaters.”

“So, our people and culture team – on a one-to-one basis, confidential – [will respond] if any employee has any questions either about employment insurance, the various government benefit programs, or their own information on ‘How long do I have to be on staff before I can apply for benefits?,’” he says. 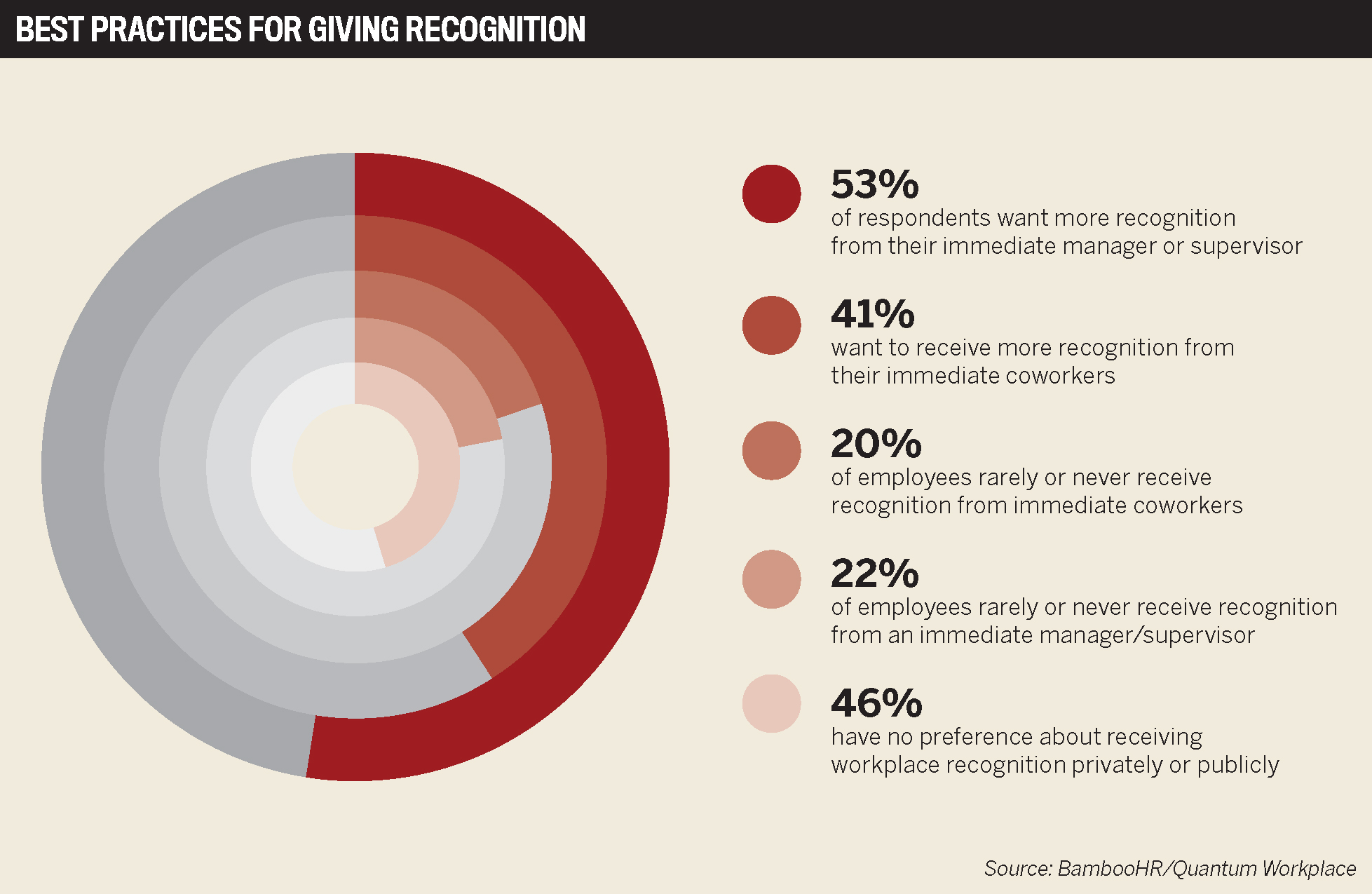 The 5-Star Rewards and Recognition entry process comprised two steps: an employer submission followed by an employee survey. For the submission, organizations had to complete an in-depth survey form with questions about an R&R program that was initiated over the last two years. Companies that successfully completed the submission phase were then sent a link to an online employee survey to be circulated internally within their organization.

The survey asked employees to rate their employer across a range of metrics that constitute drivers of employee satisfaction. Those organizations that achieved an overall satisfaction rating of at least 75 per cent were recognized as 5-Star awardees.

21% have worked three to five years at their employer

18% have worked five to 10 years at their employer