#momentsmatter about 'engaging leaders at workplaces to take a personal role and to make positive, respectful workplace cultures that keep workers healthy and safe'

With so many incidents of sexual harassment in the workplace happening, the Association of Alberta Sexual Assault Services (AASAS) is hoping to change the narrative with a storytelling campaign.

“When we listened to the research... we saw that sharing positive stories is just the best way to create more of them that’s easy and impactful not just for the person experiencing the moment… When we’re telling and hearing positive workplace stories, it actually improves our syntactic wellbeing in that moment. And what they do is they inspire similar behaviour down the road as part of that positive modelling,” she says.

“We also looked at research that says those who experience kind moments in the workplace pay it forward nearly 300 per cent. So imagine the ripple effect of that from a single moment of kindness.”

Overall, the campaign focuses on “engaging leaders at workplaces to take a personal role and to make positive and respectful workplace cultures that keep workers healthy and safe and help stop sexual harassment,” says Ofstie.

If stakeholders will focus less on individual behaviour and more on creating an environment where workers feel safe and protected, then sexual harassment is less likely to happen, she says.

“But we also have an environment for when it does happen that people feel safe to come forward, they can feel safe to disclose to their leader, to their manager or their HR representative, that they’ll be listened to, supported, and the incident will be looked into and resolved effectively and efficiently.”

Many women (25 per cent) and men (17 per cent) say they had experienced incidents of inappropriate sexualized behaviours at work in 2019, according to a report from Statistics Canada (StatCan).

In Alberta, 22 per cent of workers have been sexually harassed at work and 24 per cent have witnessed it, according to a Leger survey of 1,000 respondents conducted Sept. 16 to 24, 2020. Also, 42 per cent have heard of it happening, representing about 1.5 million workers in the province. 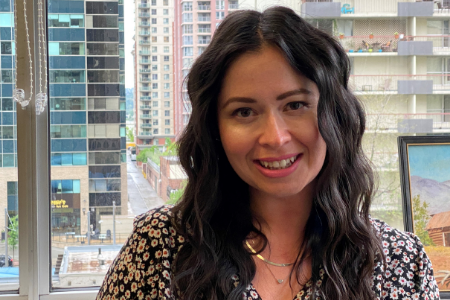 And this problem has been going on for far too long, says Ofstie.

“This is something that people and workplaces have been putting a lot of work into for the past three decades. Unfortunately, it doesn’t seem that workplace sexual harassment has really changed much in that time frame.”

Sexual harassment is prevalent and underreported across workplaces, across sectors, across industries, she says.

‘It’s really important to address [this] not only from a bottom-line perspective but from a human perspective, truly… By engaging in this campaign, promoting positive workplace cultures, we’re not only going to develop and build this dynamic, profitable and productive work community, we’re also going to help stop sexual harassment.”

Another part of the problem is that few employees (36 per cent) say they would report an incident to their leader or manager should they see it happen, and even fewer (15 per cent) would say something about it to the HR, according to the survey.

“And the reason that it is so underreported in our community is because of deeply entrenched attitudes and belief that cast discrimination and blame on people who have been targeted for sexual harassment and other sexual violence.”

Previously, researchers looked for answers to why people are not reporting incidents of harassment in the workplace.

Stakeholders can participate in AASAS’s campaign by visiting this website or by sharing their own positive stories on social media using the #momentsmatterAB.

Many workers ready to quit because of burnout