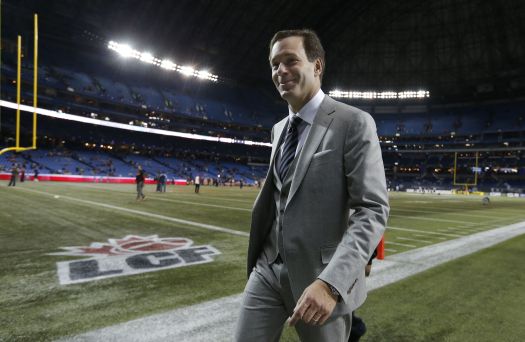 CFL commissioner Mark Cohon signed an attractive new TV broadcasting contract with TSN,
prompting the players' union to push for a revenue sharing clause and a chunk of that change.
(Todd Korol/Reuters)

Canada’s football season may be in jeopardy if the league and players’ union continue to butt heads.

Talks broke down days before spring training camps opened on June 2, with (as of press time), no plans slated for further negotiations.

Of particular concern for the players’ association is revenue sharing, a clause that had been removed when the most recent contract was signed before the 2010 season.

Much has changed for the CFL since the last collective agreement was inked. New stadiums erected in Winnipeg and Hamilton and the launch of a new franchise in Ottawa — coupled with an attractive broadcasting contract with TSN — spells a prosperous future for the budding league.

As part of the deal with TSN, which will air the next five seasons, the CFL stands to pocket around $40 million per season — more than double the amount from the last agreement.

While the union wants to ensure players get a chunk of any future revenue the league is poised to receive, the CFL denounced their offer as financially unsustainable, and one that would see the majority of teams losing money.

In an unprecedented move, CFL commissioner Mark Cohon addressed the players directly, a first during any talks between the league and players’ union.

"The biggest challenge, at the end of the day, is we’re making good progress as a league, but we’re not there yet. What we hope they’ll do is take (the offer) to the players and the players will have their say," Cohon said in an interview.

Cohon noted the financial terms currently on the table. As part of the CFL’s latest proposal, an average player’s salary would increase 16 per cent — to $96,000 — with a $5 million salary cap. League veterans would get a $5,000 signing bonus, whereas rookies would get $1,500.

The CFL further beefed up its offer. That includes a revenue sharing provision stating that, should the league have breakout revenues and new sponsorship — amounting to more than $27 million in any given year of the agreement — the union and CFL would renegotiate the salary cap.

The CFLPA countered by suggesting $12 million as the appropriate aggregate. The union's submission would push the salary cap to $5.2 million with an annual increase of three per cent. Additionally, veterans would receive an $8,500 average ratification bonus. Initially, the union wanted salaries capped at $6.24 million, up from $4.4 million under which it has previously operated.

Cohon said the league rejected that deal as it does not take into account pensions and benefits. That would see six of the nine teams losing money.

"The ball is in the court of the union now," he added. 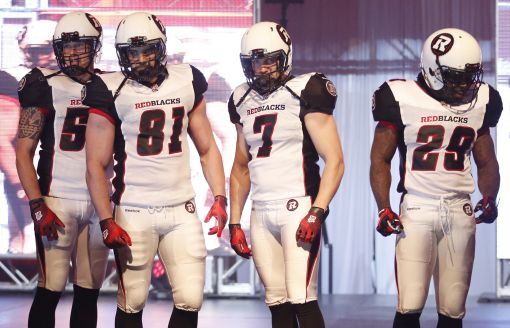 Changes to the CFL, including a new franchise in Ottawa — the Redblacks (above) — forecasts
a boost in revenue. While the league is making progress, officials say there is a long way to go.
(Patrick Doyle/Reuters)

Since its inception in 1965, the players’ association has only gone on strike once — during training in 1974. However, an agreement was reached before any regular season games were lost. That time, the CFLPA successfully negotiated pre and post-season pay hikes, improvements to the pension plan and for the first time set minimum compensation levels for first, second and third-year players.

Because players are the ones who put fans in the seats, they are entitled to a share of any revenue increases a spike in attendance might yield, said Buzz Hargrove, former president of the now-defunct Canadian Auto Workers union and current executive director at Ryerson University’s Centre for Labour Management Relations in Toronto.

"We’re back into the age-old argument in sports — how do you share the money that’s coming in?" said Hargrove, adding that sports-related collective bargaining is a whole other ball game when compared to negotiations at, say, an auto plant.

"It’s different in the sense that you don’t have the same kind of pressure. If you cancel the CFL’s games for a couple of months, the owners are going to have some big losses. The players, they’re very low-paid, many of them are under $100,000. The billionaires pay the big penalty, but they can all afford it," Hargrove explained.

Whereas shutting down General Motors, for instance, would leave it up to Chrysler, Ford and other heavyweight automakers to fill the gap, he went on to say.

Another major convention specific to the professional sports bargaining table is the unique nature of the job and the imbalance of bargaining power, noted Layth Gafoor, managing partner at Lucentem Sports & Entertainment Law, headquartered in Toronto.

"The one driver that’s different is that the history of sports and collective bargaining is one in which there was a lot of restraints that were put on players initially — in terms of being moved, of being traded," Gafoor explained. "It’s really unique because of the types of skills the athletes bring to the table, and also the fact that what’s being consumed by the customer is really a product of the talent."

And as the game goes, so goes the collective bargaining. Because the CFL has made major developmental strides in recent years, factors such as broadcasting and television are now beginning to influence all facets of the league.

As a result, this changing dynamic between players, owners, sponsors and broadcasters will set new precedents for future sports-related bargaining, Gafoor said.

"The health of a league, and the rights of owners versus the rights of players is a cool issue because it’s right and centre with the Donald Sterling case," Gafoor added, citing the embattled soon-to-be ex-owner of the Los Angeles Clippers, whose racist remarks spawned an ownership battle at the NBA. "You have a situation where, traditionally, owners have been able to sanction, penalize and dismiss players, but now we have a situation where we’ve seen it done on the owner's side."

As CFL players cautiously kick off training, it is time the fans take action, Hargrove said.

"The fans have to come in behind the players and say, ‘This is a great sport. The players, they are incredibly well-disciplined and they work hard and therefore are entitled to their fair share of the revenue.’"

The first game of the season is slated for June 26.