'A lot of times when individuals leave the military, they get stereotyped into doing jobs in police services or security guards'

For employers looking to hire tech employees, a group is offering an intriguing alternative: former members of the armed forces. Coding For Veterans is rolling out a series of road trips to help recruit those members of the army, navy and air forces in Canada who are considering another career.

Many are suited to become excellent coders, according to Jeff Musson, executive director of Coding For Veterans in Toronto.

“If you look at the skillset that someone in the military has --- leadership, attention to detail, things like that --- those soft skills are what makes for the best individuals in software development and cyber security,” he says. “In the tech sector, it’s projected a shortfall of 147,000 IT jobs in Canada are going to go unfilled in next 12 to 18 months and in order to really close that gap, from a Canadian tech sector perspective, we have to figure out how to fill these jobs.” 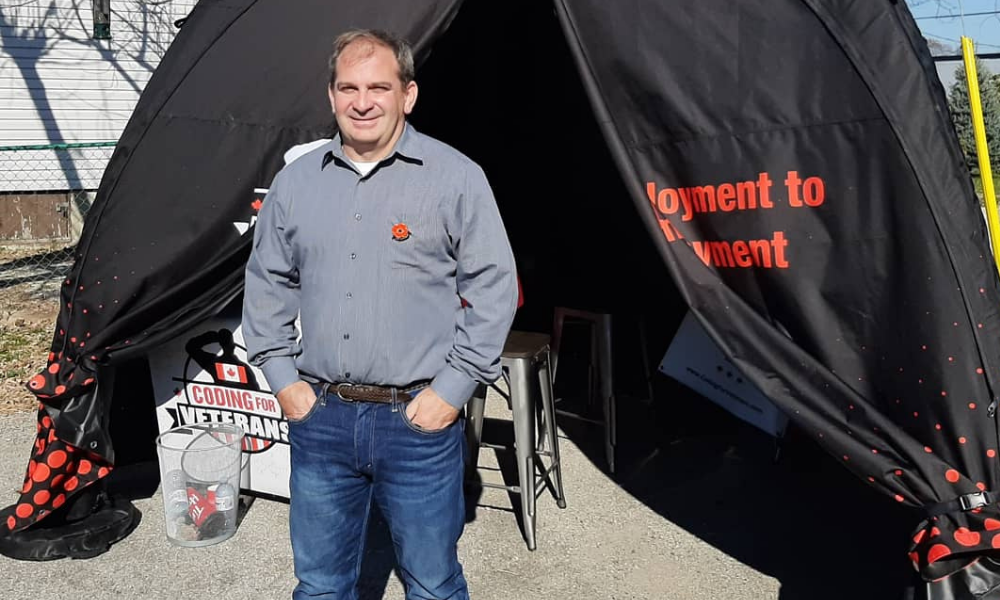 The tour will stop in most major military installations and training centres in Canada for the next to months ahead of Remembrance Day in Ottawa on Nov. 11.

The program has expanded this year to include military spouses and family members among its students. Most recently, to support the resettlement of those citizens of Afghanistan who served alongside our troops, C4V has opened the program to allow Afghan interpreters who can safely immigrate to Canada, to enroll and retrain for tech sector jobs alongside the CAF members they once served beside.

The group has partnered with the University of Ottawa to offer an eight-month online program in software development and cyber security, funded by Veterans Canada.

“The whole theory behind the program was: ‘Can you identify, out of the 7,000 men and women who leave the military on an annual basis, those that have an aptitude for tech?’,” says Musson. “There’s virtually 100 per cent placement in our program for the graduates.”

The success comes partly due to a pre-screening process done by Coding For Veterans. “If someone identifies that they would like to be part of or are considering a career in the tech sector, we actually run them through a 45-minute online assessment to make sure that your skillset aligns for a career in the tech sector, because we don’t want to waste their time and money and vice versa,” says Musson.

One of the biggest challenges faced by former military members comes from employers that try to pigeonhole them into a limited career path, he says. But this attitude is not helpful and is wrong

“A lot of times when individuals leave the military, employers do not realize the skillset that they bring to the table and consequently they get stereotyped into doing jobs in police services, or security guards or whatever and what we’re saying is, ‘Your skill set is perfectly aligned for a tech sector career,[ something that they never even would think about. Out of the people in our program, one of the largest areas that we draw from are people actually in artillery and infantry and they don’t have really a tech background so it’s neat to see how that evolves.”

For those employers that have hired veterans, the results have been positive, according to Musson. “They love it because one thing that someone from the military has is leadership, detail, loyalty: they make for some great employees.”

As for the people in the military, the “have gone from defending our country on the battlefield to doing it now in cyberspace and they love that because they can still serve, although in a different capacity,” he says.

For HR professionals who might be reluctant to hire a veteran, rest assured, says Musson.

“With employers, there’s minimal further education or training required; they’re ready to hit the ground running on day one and in the case of some of the individuals in our program, they still maintain their security clearances, and it can be transferred over to the employer so they could start working the moment that they get hired. The onboarding process is really a streamlined one working with us.”

A recent survey showed that many firms are having trouble finding enough skilled IT employees, while another one found almost three-quarters of organizations are seeing challenges in attracting new workers.